The Royal Dunedin Male Choir’s concert at the Dunedin Town Hall on Monday evening was enjoyed by the choir’s regular followers and patrons/ Despite being December, because of Covid restrictions it was the choir’s first concert for the year and also its first under new musical director John Buchanan MNZM, who also compered.

During the evening Frances Brodie was presented with flowers and farewelled after 22 years as deputy accompanist.

The programme began with the organ accompanying a robust rendition of "With a Voice of Singing", followed by two traditional spirituals arranged for duo pianist accompaniment (Linda Folland and Sharon MacLennan) by H. Helvey – "I’m Gonna Sing When the Spirit Says Sing" and "This Little Light of Mine". Ideal repertoire for this choir and good balance and tone were achieved.

The choir numbers 40 at present and is performing with good blend, intonation and reasonable clarity of diction.

Among other items were a traditional English carol, "On Christmas Night", which built to an impressive climax, and another Helvey arrangement with duo pianist accompaniment, "Tomorrow Shall be my Dancing Day".

Three pieces from pianist Sharon McLennan were an early keyboard sonata by Scarlatti, B Flat Major No 500, which displayed excellent scalic and stylistic contrapuntal technique, a pleasantly lyrical Godowsky arrangement of "Elegie" by Rameau and "Across the Vast Eternal Sky" by contemporary Swedish composer, Gjeilo.

Organist David Burchell contributed to the programme with his own arrangement of "The Arrival of the Queen of Sheba" (Handel), Elgar’s impressive "Imperial March" and a hymn tune by French organist Naji Hakim, which skipped along merrily with lighter organ settings. It is always thrilling to hear Norma (the organ).

"Morte Criste" (Jones) was sung with great feelings as a dedication to three choir members who have passed away recently, and a John Rutter arrangement of the doxology "The Lord Bless You and Keep You" was a perfect ending to the choir’s programme, after a lean year of public performances.

The Dunedin Town Hall was well filled on Monday evening for this year’s final concert by the Royal Dunedin Male Choir.

The choir was in excellent form, conducted by Richard Madden QSM in what is the end of an era as Madden retires after 20 years, 19 as musical director.

He received the choir’s Golden Lyre award, together with a presentation and appropriate comments from president Peter Keddell. Judy Bellingham was also officially welcomed to the position of patron of the Royal Dunedin Male Choir.

The programme comprised Madden’s favourites from past years. Linda Folland and David Burchell (organ) accompanied and the compere for the evening was Lyn Murray.

I felt the choir was very much at ease with the familiarity of the music, determined to give of its very best.

Some highlights were the power-packed delivery with organ of An American Trilogy, an unusual setting with many modulations (well done, tenors) of It is Well With My Soul and a passionate, harmonically blended rendition of The Lord’s Prayer.

Operatic favourites came with a dynamically riveting Speed Your Journey (Verdi) and guest appearance of international baritone Martin Snell, Madden’s longtime friend who travelled from Europe to honour him with arias by Wagner, Tchaikovsky and Rossini.

They performed individual brackets and a definite favourite was the combined choirs in a big rollicking sound for The Twelve Days of Christmas.

Richard Madden’s farewell choice, accompanied by organ and band, was Alwyn Humphreys’ arrangement of What Would I do Without My Music? — a sentiment with which I totally agree.

Changes at the Helm

With much reluctance, the Choir committee accepted the resignation of our esteemed Musical Director, Richard Madden QSM earlier this year.

Richard has been our leader and Musical Director for the past 19 years and in that time has lead the Choir through approximately 38 Subscriber concerts and numerous performances at local rest homes and further afield to outlying communities to support cultural evenings and fund raising occasions. His final concert leading the Choir will be held in the Dunedin Town Hall on Monday 2nd December commencing at 7.30pm. He has chosen some of his and the Choir’s favourite items and has assembled some outstanding guest artists, not the least of whom is an old friend of his, Martin Snell who is a well-known Dunedin bred and educated Bass opera singer commanding a high profile on the world stage.

Richard joined the Choir in 1998 as a 1st Tenor and in 2000 was appointed deputy conductor. Following the death in 2001 of the then leader Les Bonar, he accepted the role of Musical Director and immediately made his mark. He has continually and patiently challenged the Choir with items such as “Bohemian Rhapsody,” and “We will Rock You” and in June 2018, “Rhythm of Life” and many more items for us to learn and perform.

In recognition of his “Services to Music,” Richard was awarded the Queens Service Medal in the 2017 Queens Birthday Honours. This richly deserved award was the climax of a remarkable career and the Choir will surely miss his patient guidance and musical expertise. We take this opportunity to wish Richard and his wife Robyn, a long and happy retirement in sunny Central Otago.

Best wishes Richard and very many thanks indeed.

Appointment of a new Musical Director

It is with great pleasure that we announce the appointment of John Buchanan MNZM as our Musical Director following the recent resignation of Richard Madden QSM.

John has had a long and distinguished career and has known Richard Madden most of his life. He acknowledges that he has “big shoes to fill.” Like Richard, he started singing at the age of 7 in the “Choir of St. Pauls Cathedral, Dunedin” who coincidently are performing as guest artists at our forthcoming concert on December 2nd at Dunedin Town Hall.

A quick summation of his C.V. shows that he was encouraged by Donald Byars - the choirmaster at the cathedral, to start conducting at the age of 15 working with the Choir of St. Martins Church, N.E.V. Dunedin before moving on to Teachers’ College where he gained a DipTch-Music.

He sang with St. Mary’s Cathedral choir in Auckland under Peter Godfrey for five years before moving to England teaching music for two years. During that time he conducted the local choral group as well as spending a great deal of time listening to choirs around England.

Back to teaching in NZ he again became involved in the Holy Trinity Cathedral choir in Auckland under Anthony Jennings. It was during this time that he also sang in the small vocal group Quintus who gave many concerts around the North Island as well as recording artists for the now Radio New Zealand. He was invited to conduct the 80 strong South Auckland Choral Society and was with them from 1983 - 1994. He also guest conducted the Papakura Civic Orchestra for eight years.

In 1994 he moved to Wanaka to run his own Wines and Spirits business and the following year started to conduct the Wanaka Singers, and in 1998 he was invited to conduct the Alexandra Civic Orchestra where he was Musical Director for 12 Years. In 1998 he formed what was to become the Central Otago Regional Choir. This choir was permanently established in 2004. He continued conducting the choir until the end of 2018. During this time the choir performed two main concert seasons of three concerts in Queenstown, Wanaka and Alexandra.

Other highlights were two teaching stints at Mt. Aspiring College. In 2006 after a move to Alexandra he was asked to relieve at Dunstan High School while the HOD music was on maternity leave for a year. It became a very long year as he retired from the school at the end of 2018!

While there, John conducted the school's mixed choir, “Dunstanza” growing their numbers from 15 to 85 by the time he left in 2018.

He has won many accolades during his professional career including the Dunstanza senior girls’ choir Gold Medals at Melbourne Eisteddfod in 2014; People’s Choice in the 2015 Big Sing Regional Competition and in 2017 winning a silver award and the award for the best presentation of a song in Te Reo at The Big Sing Finale in Auckland. In 2018 the Seniors Girls were invited to attend the Australian International Music Festival in Sydney where they gained a very high Silver Award

When John returned to Dunedin earlier this year he was invited to conduct Opera Otago’s production of Mikado. He is also very involved with the New Zealand Choral Federation and he was contracted by them to organise three musical festivals in three regions of the country.

John now lives in Dunedin with his partner Sharon McLennan.

We welcome John with much enthusiasm for the future.

The Choir has much pleasure in announcing the appointment of Judy Bellingham MNZM as it’s Patron and we look forward to a long and fruitful association with her.

After a long and distinguished international singing and teaching career we are particularly fortunate that Judy has agreed to be our Patron. In fact she has stated that “this is a most exciting time for her and she hopes too for the Choir as they gauge practical and moral support from their new Patron.”

Judy will be our Guest of Honour at our December concert where she will be introduced and welcomed by our President, Peter Keddell. 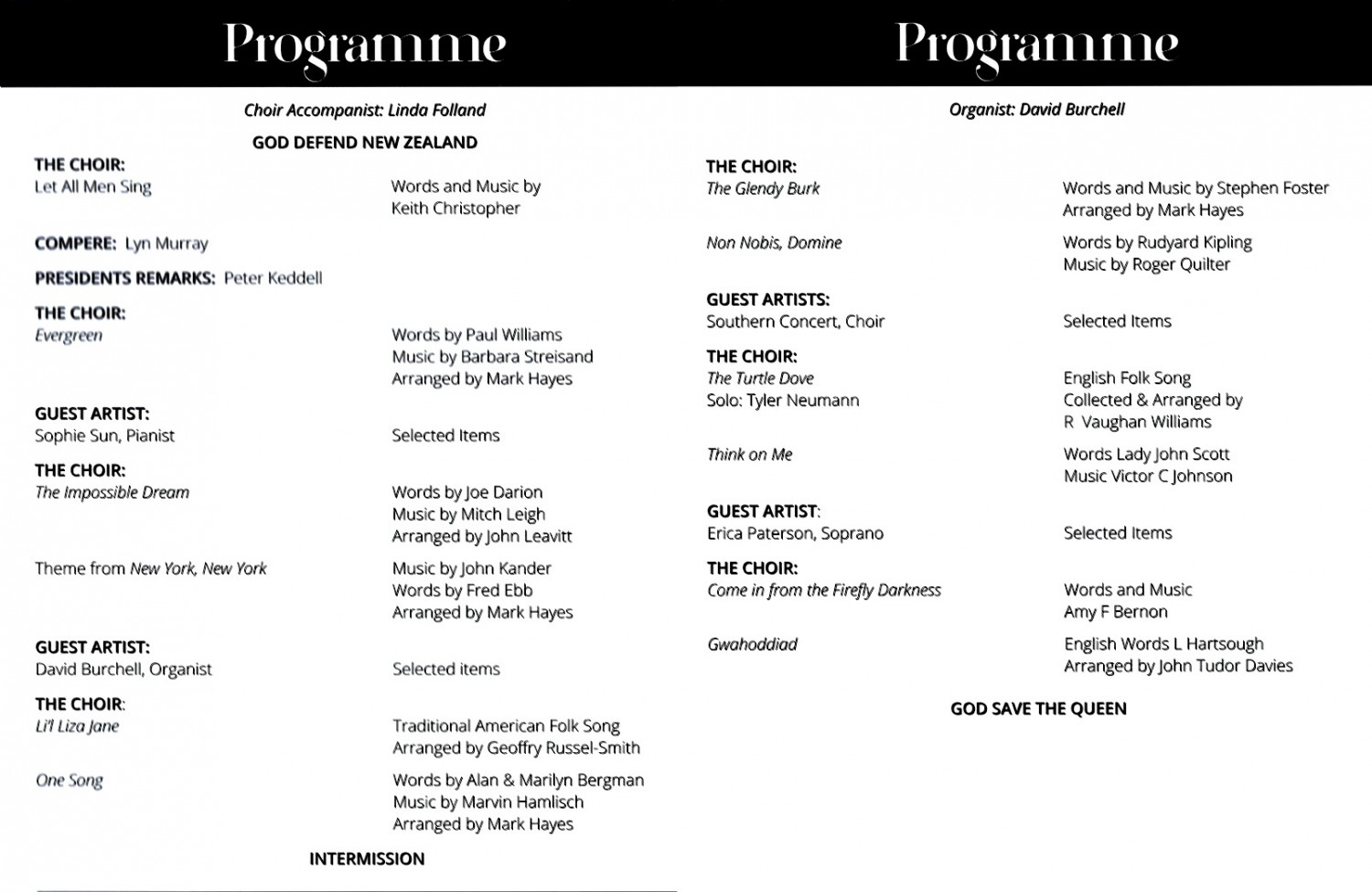 The choir was in excellent voice with plenty of new repertoire among old favourites. A powerful robust Let All Men Sing opened the concert and the favourite Gwahoddiad was a commanding final item.

Other choral numbers included The Impossible Dream, New York, New York, The Glendy Burk, which was a rousing folk-tune with finely shaded harmony, a laid-back delivery of the Streisand hit Evergreen, The Turtle Dove with two beautifully enunciated verses from soloist Tyler Neumann, and a new song Come In From the Firefly Darkness by Amy Bernon. One Song (Hamlisch) with its deep and meaningful text was dedicated to the people of Christchurch.

David Burchell accompannied several items from the town hall organ and also contributed three contrasting solos: a rousing delivery of Mendelssohn's War March of the Priests Saint-Saen's famous The Swan in an arrangement for organ which I found disappointing, and a most entertaining contemporary work by Lebanese-French composer and organist Naji Hakim (1955-).

Guest artist pianist Sophie Sun (year 12) chose classical repertoire by Brahms and Chopin, and Prelude Op.3. No.2 by Rachmaninoff, all displaying exceptional talent and memory in one so young. Soprano Erica Paterson (accompanied by David Burchell) sang selected songs, and Daniel Kelly conducted the Southern Consort in three a capella numbers, maintaining the flair and high standard of musicianship this group is currently achieving. The choir's accompanist was Linda Folland and the afternoon was compered by Lyn Murray.

The 2019 Annual General Meeting was held on 25th March.